My Fitness Journey, Part I. 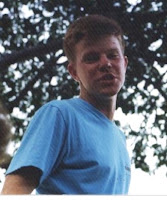 I was always a skinny kid. I could eat anything and everything I wanted and I still never gained weight. When I joined the Marine Corps at eighteen, I was still stick-thin. In fact, I came THISCLOSE to being put on double-rations while in Boot Camp to fatten me up. For nearly four years, I ate calorie-heavy food, drank crazy amounts of alcohol, and rarely gained an ounce. I credit a turbo-charged metabolism and nonstop Marine Corps physical training.
Unfortunately, after leaving the Marine Corps, I continued to eat and drink the same way for many years. What I didn't continue was the physical fitness training. And year after year, meal after meal, my body began to change. It was subtle at first, but weight gain was inevitable. I gained a couple of pounds each year, and by my mid-thirties, I could no longer pretend that everything was fine. But I didn't really know a way to turn it around.
In late 2005, a friend surprised me with a 5K while we were together in Chicago. It was my first and I finished, and it got me thinking about my health and fitness levels. I spent the next year off-and-on at the gym and managed to lose a bit of weight. In January of 2007, I was diagnosed with Pertussis. (It's the adult version of Whooping Cough, and yes, I did feel like a 17th century peasant with the Plague.) For nearly one hundred days, I coughed. I could barely move, let alone workout. And even after I recovered, I didn't feel like doing anything healthy. I was angry at having been sick for so long and resigned to a life of being overweight. 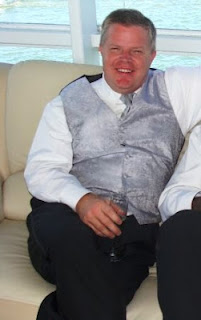 And for the next three years, I ate and drank my way to my heaviest weight ever. After I hit 220 pounds, I stopped stepping on the scale. I just didn't want to know. But in June 2010, my annual Marine Corps Reunion was held here in San Diego. For several days, I was surrounded by my Marine Corps brothers and sisters. They were all people who knew me back in the day, and for some, it had been 20+ years since they had seen me. And you can imagine how different I looked to them.
You would be right if you credit them for waking me up from my mental funk. But it didn't happen the way you might think. They didn't make me feel fat or bad about myself. Quite the opposite, in fact. They helped me remember the person I used to be, the young Marine who was fearless and funny and passionate about life. They helped me see that I was still that person; I just needed to reach out and take control of my life again.
And I did. I had been a member of SparkPeople.com (a free health and fitness website) for over a year, but I had never really explored the site. Now, though, I began checking in every single day. I read articles, took quizzes, joined teams, and started blogging.
I also made a commitment to myself that I would be perfect - yep, perfect - but just until I got myself back under 200 pounds. That meant no alcohol, no fast food, no desserts and no eating out. It meant going to the gym and working out every single day, no exceptions. I knew it wasn't something I could live with forever, but I could definitely do it long enough to drop 20+ pounds. 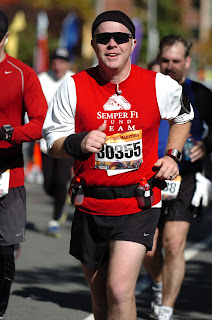 It worked. Soon, I was down to 198.5 pounds. In August, I signed up for a Bike The Bay challenge and in September, I ran the Marine Corps Boot Camp Challenge. I was definitely on my way. By December 2010, I was solidly in a groove. I had a new lifestyle - eat healthy, be active, repeat consistently. And I was ready for a new challenge. I signed up for a 5K, then a 10K, then a half marathon... and then another! In 2011, I ran two half marathons, the Tough Mudder, the Super Spartan, Bay to Breakers, Warrior Dash, and a Ragnar Relay. My crowning achievement, though, was running the Marine Corps Marathon in October. It took me every bit of five hours to finish it, and I am as proud of that as if I had won the whole thing.
Since then, I have run nearly a dozen half marathons and I have another full marathon coming up. I have found a balance in my life, eating and being active while indulging from time to time in my favorite foods and drinks.
Looking back, I understand why my first attempt in weight loss in 2005 didn't work. I was all about the physical, and I completely ignored what was happening in my mind and in my heart. I didn't just eat because I was hungry. I ate because I was sad and lonely and depressed. And that doesn't just go away on its own, no matter how much weight you lose.
This time around, I have worked on more than just my body. Instead of focusing on losing weight, I have focused on an overall fitness plan. I'm a happier person, inside and out, and I am better able to separate the food I need to eat from the junk I was inhaling without thought. These days, I finally get it. And the simple truth is, healthy is the new skinny. 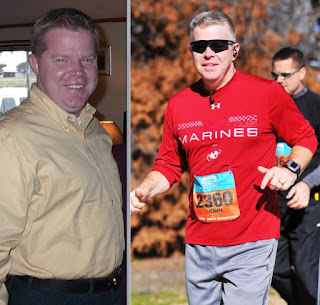 I don't judge my success by my weight. Instead, I think of the miles I've run, the races I've completed, the challenges I have met... and most importantly, the relationships and friendships I have made along this journey.

I struggled along the way. I still struggle sometimes. But I am proof that anyone with a plan and a will to work for it can go from couch potato to marathoner. Join me as I continue to make my life an adventure.


(Originally published as My Story in May 2012. An updated version will follow.)