It's no easy feat, bringing together people from all across the country and preparing them for a 36 hour, 223 mile running adventure. But with with some planning, hard work, and a bit of luck, it can be done. And this weekend, we're going to prove it.

My adventure began Wednesday, as I headed to Lindbergh Field in San Diego to fly out. My hopes for an uneventful travel day were dashed early, as I arrived at the airport at 9:30am to find overflow crowds trying to check in with the Sky Cap and at the Southwest ticket counter. Feeling crafty, I took advantage of the shorter lines at the "no baggage, boarding pass printing only" kiosk and then the "express baggage drop-off for those with boarding passes already printed" counter. It took me less than ten minutes to go through both of those lines, bypassing the full-service line and its forty-five minute line. After that, it was a quick dash through security and I was at my gate.

Unfortunately, I burned through all of my luck, because at that moment, everything turned bad. My 10:35am flight was delayed until 10:55, then to 12:50. Every other flight out of my terminal was delayed, as well. Seems heavy fog had grounded planes at airports across the country, so there were no planes at all on the ground in San Diego. The already small Southwest Airlines terminal quickly became a massive crowd of people with no place to stand, let alone sit down. Passengers were packed from wall-to-wall, pushing back all the way to the security area. Literally, every stair leading back down towards the TSA area was filled with people occupying the last of the sitting space available. 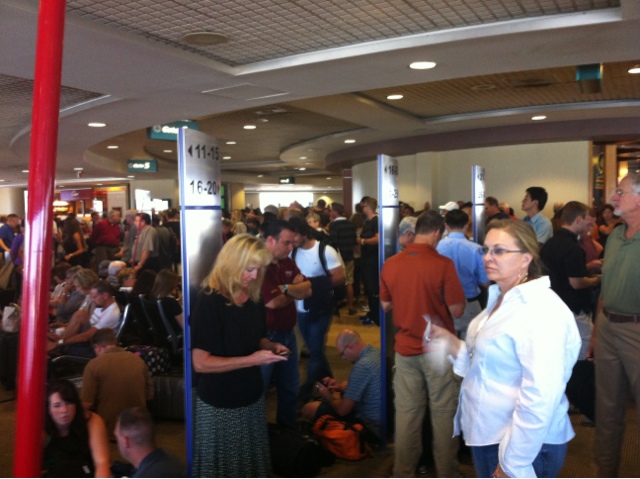 With no place to stand upstairs and three hours to kill, I decided to head back out of the secured terminal area and go to the restaurant in the front area of the airport. *BINGO*! There were only four people inside and there was plenty of space for me. I ordered a beer and some food and decided to pass the time away from the crush of people upstairs.

Over the course of the next hour and a half, I received no fewer than six text messages from Southwest Airlines letting me know that my flight was changed to 12:35, 12:50, and 1:00pm, plus multiple gate change notifications. It was a crazy amount of shuffling, so I just ignored it and enjoyed my early lunch. By 11:30, I was making my way through security (again) and rejoining the massive crowd still seeking escape from Lindbergh Field.

Finally, to the relief of passengers and airline personnel alike, planes began to arrive and then depart from San Diego. My flight left at 1:00pm, and I was thrilled to make the quick trip to Austin without a third passenger occupying the middle seat in my row. By 6pm local time, I was deplaning here in Texas and joining my friend, Brian, who had himself arrived from Long Beach an hour before. Baggage claim was quick and we were out of the terminal and into the car with my Aunt Susan. I had arrived in Austin!

Because Brian and I had arrived a day before everyone else on our team, we were able to enjoy a quiet night out for dinner. We went to Carino's Italian restaurant and had a fantastic meal. After my day of travel nuttiness, I decided I had earned a couple of Italian Margaritas, too. Hello, icy deliciousness. 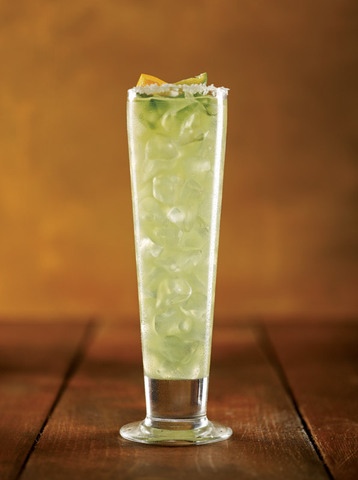 Soon enough, we were done with dinner and home at my Aunt's house... or as I like to call it, Race Headquarters. And then, the best part of the whole day for me, I had the chance to visit with my Aunt for a few hours. We talked about everything and nothing and the time flew by. By midnight, it was time for bed. Kind of. I actually puttered around online until 1:30am, but then, I was off to sleep.

Day One of the great Texas Relay Race adventure was done.