As everyone surely knows by now, the US Supreme Court ruled yesterday that the Defense of Marriage Act is unconstitutional and that same-sex couples have the same right to marriage as anyone else.

Cue the wailing from the anti-equality folks.

After the court struck down in a 5-4 decision on Wednesday Section 3 of the federal law that recognizing marriage as a union between one man and one woman, Rep. Michele Bachmann (R-Minn.) issued a statement.

"Marriage was created by the hand of God,” Bachmann said in the statement. “No man, not even a Supreme Court, can undo what a holy God has instituted."

There is so much wrong with this, it's hard to to know where to start. But I'll try. First, Bachmann is unclear on the distinction between legal marriage and holy matrimony. The Court ruled that everyone is legally entitled to the rights and protections of legal marriage. They said nothing about God, churches or holy matrimony. Churches still retain the right to discriminate and deny the rites of matrimony to anyone they choose. Catholic Churches can still refuse to wed non-Catholics, Synagogues can still refuse to wed Gentiles, and fringe churches can still refuse to marry inter-racial couples, divorced men, trophy wives, celebrity dopplegangers, and door-to-door salesmen if that's what the tenets of their faith command them to do.

And to the legal marriage aspect, well, man has been undoing them as long as there has been the institution of marriage.


How are we doing so far? Everyone keeping up? Because it really isn't that complicated. The individual (or collective) beliefs of a church dictate that church's response to same-sex couples wanting to marry. But, those beliefs have zero impact on whether or not a same-sex couple chooses to be married in the eyes of the law.

If you are opposed to same-sex couples getting married, you can still voice that opinion. You can still rally with your church members and speak out against it. What you can no longer do, however, is deny gay and lesbian couples the same rights and protections that come with legal recognition of marriage.

There. I hope that clears that up. And just for grins, here's a picture of my husband, Ric, and I after our marriage ceremony on July 4th, 2008. 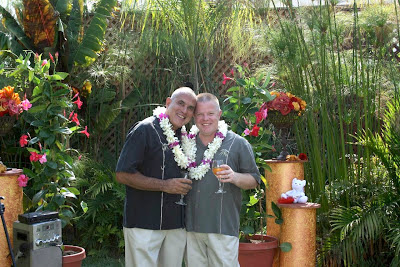 P.S. If you are under the mistaken impression that Civil Unions and Domestic Partnerships are equal to marriage, here is just one example of how they differ.