Friday was a fantastic day. I'll just say that straight out. It was a great mix of family, friends and fun, and I loved every minute of it.

So far, so good. I'm two for two for the month. Go, Me! And now, the fun details.
Yesterday was Friday, and like every week, I worked a half day and was out of the office just after twelve. I had a few stops to make and a few people to pick up, and then we all made our way up to La Jolla Cove. It was an absolutely perfect afternoon, with a light breeze, blue skies, and all kinds of sunshine. 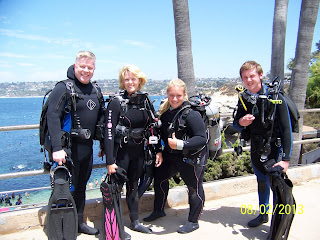 My cousin and my two friends were with me and we spent nearly an hour scuba diving in the Cove. There was much to see with all the local sea life, but my favorites were the sea lions. They were everywhere in the cove, swimming around and darting in between us. They were so close, at one point I was staring right into one of their faces. It was like playing with dogs in a park, almost. I'll share video as soon as I can get it edited.
After the dive, it was time for our Huli Huli Chicken and Game Night. Yeah, I know, that's a long title. But we had the most amazing chicken and rice dinner, followed by a million laughs playing Cards Against Humanity.
Thanks to everyone who joined us. I don't know how the night could have gone any better.
And now, it's time for me to run. Literally. I have ten miles to complete today. Time to beat feet!