Sometimes, I surprise myself.

A kernel of an idea takes hold and, before I know it, it's become a full-fledged plan. That's what happened today.

A great friend of mine from the midwest will be coming to Los Angeles to observe the Nautica Malibu Triathlon. And since she is coming all the way here to California, I decided that I would drive the two hours north to spend some time with her. I hadn't worked out the details, but the trip was a definite.

The vague became the specific quickly. It started with an email from an old friend to a few people, me and her sister included. There was discussion back and forth about an Iron Man Triathlon in Tennessee in 2014, and a plan for my friend to escape that craziness and head to Ventura, instead. And that led to talk of the Ventura Marathon.

From there, the marathon called to me and I answered. Now, I am officially registered to run the Ventura Marathon on Sunday, September 8th. 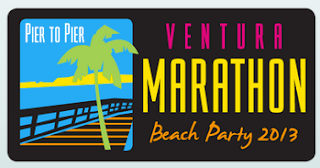 It will be a busy weekend, certainly. It starts with running the Aloha Run 5k on Saturday morning. After that, I'll spend some time at a birthday party Saturday afternoon, then drive up to Ventura for the night. Sunday morning early, I'll run the marathon. Then I'll head to Malibu, visit with my friend, and check out some of the action at the triathlon. Finally, I hope to meet up with a different friend and celebrate her birthday. A couple hours of driving home back to San Diego and that will be the end of my crazy weekend.

It's still kind of unbelievable to me, that I can decide on a whim to run a full marathon and have the confidence to know that I can do it. My life is so different today than it was a few short years ago.

And that's a good thing.