The Good, The Bad, and The Ugly.

Let's talk about my Saturday long run. It was good, it was bad, and it was ugly. 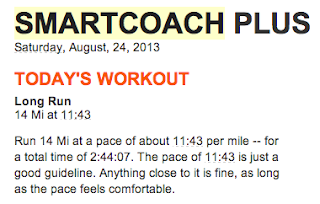 First, the good. I was supposed to run fourteen miles in approximately two hours and forty-four minutes. And I did it. That was very good, indeed.

The bad? I felt so good over my first ten miles that I got cocky, and that led me to make a poor decision. Fourteen miles is no small accomplishment, and I should have been content with that. But no, after mile ten, I decided that I knew better than my training plan and I pushed myself to go faster than scheduled. The first two miles weren't so bad, but the last two? Oh, they were not good.

The ugly? My plan to run fourteen miles unwound during mile thirteen. I pushed myself too hard, too fast and I paid for it at the end of the run. Instead of mile thirteen being all run, I had to stop at 12.9 and walk until I hit 13. It was disappointing, because I had intended to run it all. And as I ran the last mile, it was even worse. I had to stop at 13.4 and walk until 13.5, then again once more before finally running the last bit.

It's not a big dramatic failure, but it was humbling. The first ten miles felt so great that I lost sight of my training goals. And I paid for it. Next Saturday, when I run my sixteen mile long run, you better believe I will stay on pace.


The good, the bad, and the ugly. They're all a part of running, right?