Intersex - It Doesn't Mean What You Think It Does.

(You wake up thinking you're going to write a blog about one thing and *bam*, something on social media takes center stage and derails that blog completely. Fine. I'll post that later. This is more important, I think.)

So a big, splashy story that will play out all across social media today is that  a woman who dated Michael Phelps﻿ for a time was "born a boy." Cue the drama and the "did he know?!" and "dude, that's any guy's biggest nightmare!" and "Phelps banged a gay dude!" 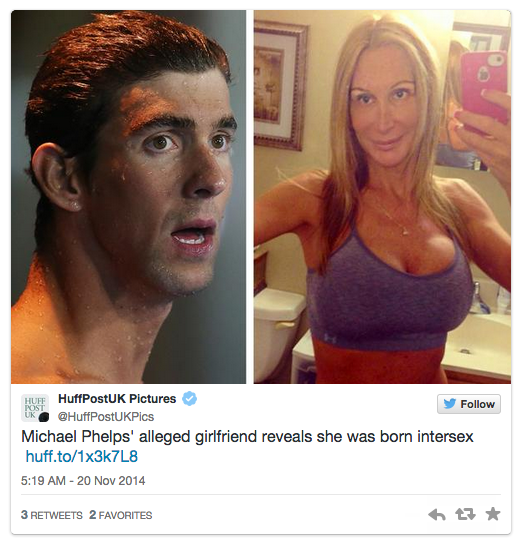 None of that is correct, by the way. And though I realize I am just one person posting facts in a sea of drama, I'm still going to give it my best shot.

The lady in question was born intersex, meaning she was born with both male and female genitalia. She had a penis but no testicles, ovaries but no uterus. It's unusual, obviously, but it happens. People are born with all kinds of physical abnormalities, but anything involving sexual identification makes people even more uncomfortable.

According to this woman, she was forcibly non-consensually assigned a boy's gender at birth but felt like a girl all of her life. She says, "I was born intersex and named David Roy Fitch at birth. By the time I could walk and talk I made it clear I was a girl and dressed as one. In my early teens I was medically diagnosed and went on testosterone blockers, at 15 estrogen enhancers."

There is a lot unknown here about her relationship with Michael Phelps... or if she even had a relationship with him. She may just be making all that up to make herself infamous. I don't know, and honestly, I don't really care.

So why am I posting this? Because what I do know is that there are other people out there who were born intersex, made or had made for them choices about who they were, and have lived with those choices. And I can only imagine how those people must feel each time they see a headline that mocks this woman, insults her as a freak, or implies that anyone who would be involved with them should feel shame or embarrassment.