If you've ever wondered how Ric and I met, how a judge later described it, and what any of that has to do with our Christmas each year, this is the blog for you.

First, the backstory and a confession. When I go out and have a few cocktails, I may or may not definitely collect things. Nothing of value, really, more like trinkets. I see a cool coaster on the bar, I take it. On one occasion, I even came home with a tambourine. (I had to take that back the next morning. Have you ever tried to walk quietly into a bar while carrying a tambourine? Can't be done.)

Anyway, the point is, I have been known to gather souvenirs on my nights out. And that is a significant part of this story.

December, 1996. The guy I was seeing was invited out to a birthday party, so I went along as a very disinterested "Plus One." The party was at the Inn At The Park hotel, upstairs at their rooftop bar. I was enjoying my second third whatever beer and found myself standing directly in front of one of their dozen decorated Christmas trees.

And then it happened. Something shiny caught my eye and I knew I had to have it. It was an ornament. Nothing special about it, really. It was one of those styrofoam balls wrapped in thread. It was cheap, already fraying, and not likely to survive to see another year.

Obviously, I had to have it. I did the oh-so-sneaky look around to make sure no one was watching, and then I made my move. I reached out quickly, grabbed the ornament, and tugged.

That's the moment all the lights on the bottom half of the tree went out. Yep, apparently there was a short in the wire, and my yanking on the tree was enough to power down everything from the middle down.

So, what do you do when something like that happens to you? If you're like me, you instantly scan the crowd to see if anyone saw you do it.

I scanned right. No one. I scanned left. Nothing.

Wait. Scan left again. Yep, that guy is staring right at me. And he definitely saw.

I gave my best shoulder-shrug-meh-whatcha-gonna-do look and said, "I guess that's God telling me not to steal that ornament, right?"

He gave an equally casual shrug and said, "Maybe. Or it's the Devil saying take all you want from the bottom half."

I processed what he said and made a command decision. First, I reached forward and yanked that ornament right off the tree. Second, I took a step closer to him and introduced myself.

And that's the first time I ever spoke to Ric.

That ornament is still hanging in there, pardon the pun. In fact, it's the very first ornament that Ric and I put on our tree every single Christmas. Here it is this year: 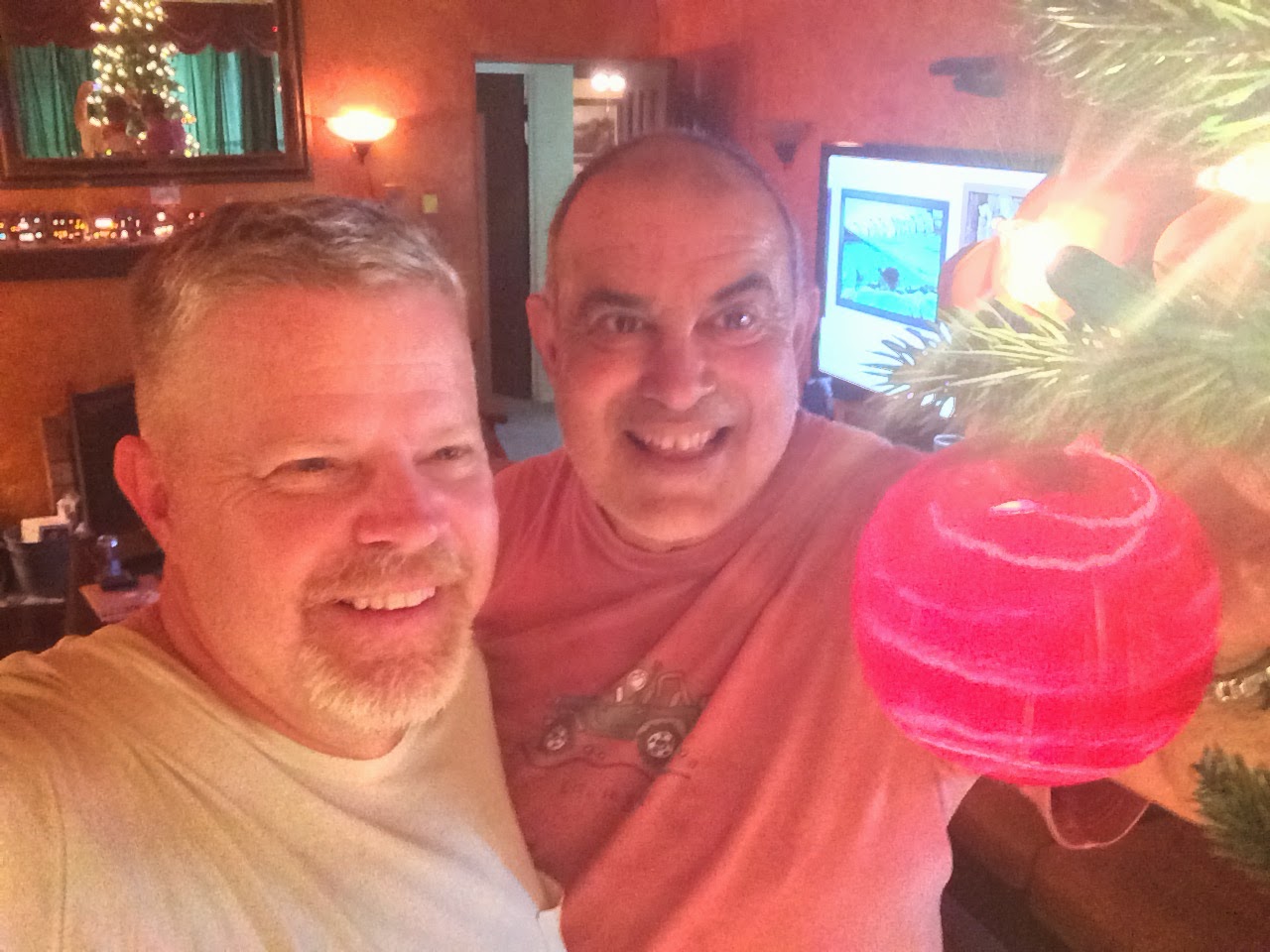 P.S. The judge I mentioned? Years later, Ric and I were out having drinks and the conversation turned to everyone's "how did you meet?" story. I shared ours, and the gentleman sitting next to me said, "fun, petty larceny becomes true love." I laughed. He laughed. We all laughed. Then when he got up to use the restroom, the bartender leaned over and said, "it's funny because he's a retired State Supreme Court Judge. Oops. Fortunately, the statute of limitations is on my side.