"Your Religious Objection Is Not My Legal Problem."

As long as there has been religion, there have been people using it to justify their actions. It's not really a new phenomenon. What is different at this point in history is that we live in a country that values freedom of - and freedom from - religion. We even enshrined that notion into our Constitution. And that means that we are not bound by the doctrines of others. We can enjoy our civil rights even when they conflict with the religious objections of others.

We can drink even though the Baptists don't officially allow it. We can enjoy coffee and tea even though Mormons aren't allowed to drink either. We can have sexual intercourse out of wedlock and we can swear and we can eat meat on Fridays during Lent.

Individually, we are not required to conform to the tenets of someone else's faith. And that's the beauty and glory of America.

Granted, there have been problems along the way. Some people have confused their religion for the law of the land, and others have suffered because of it. 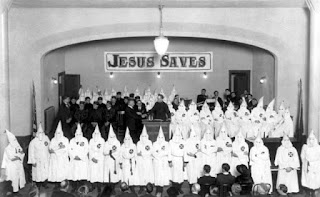 And now, along comes same-sex marriage rights and once again the rules for living in a civil society go by the wayside. Court clerks cite "deeply held religious convictions" to deny issuing marriage licenses to gay couples. Attorneys General and Governors instruct government-sector employees to willfully and purposely refuse to do their taxpayer-funded jobs.

No. That's not how this works.

Imagine that a woman in the US goes to her local DMV to renew her license, but she's told by an employee that "it's a sin for a woman to drive" and therefore he won't allow her to take her written test.

"Sorry," he says, "but you cannot compel me to violate my deeply held religious beliefs." That is exactly what is happening when marriage licenses are denied.

(And no, you cannot cheat the question by saying, "well, someone else at the DMV can help that woman." Because (a) what if all the employees share the same objection and (b) what about smaller offices where there may only be one employee on staff?)

I understand that Americans are allowed to be bigots. But American government institutions are not allowed to discriminate. And public officials who refuse to fulfill the legal requirements of their role may not use religious objections as justifications. They need to resign their position and leave their tax-payer funded public role.

A friend asked me why I think so many people are confused by this distinction, between civil liberties and religious restrictions. It's a good question.

Honestly, I think it comes down to a narcism of beliefs. The people pushing back are so morally sure of their religion, of their values, and of their rules, that they just cannot put themselves into someone else's shoes. Specifically, they can't imagine being denied something themselves because of their "sin."

But because the people being denied their lawful rights are homosexual, suddenly "religious liberty" trumps an individual's right to the lawful exercise of a court-ordered right.

The other problem is that too many of these same conservatives have zero understanding of the distinction between holy matrimony and legal marriage. They confuse the pageantry of their faith with the lawful requirements of being wed. It isn't the ceremony in the church that makes you spouses in the eyes of the law, it is the signing of the marriage license and its subsequent filing with the county courthouse.

I respect anybody who stands true to their convictions. But there is a consequence. If a public employee is not willing to do the job they are paid to do by all the citizens in their town/county/state, they are free to resign from their employment. They can stand up in their church or mosque or synagogue or homemade shrine and rail against the evils of whatever it is they disapprove of. But they cannot remain in a public role and refuse to perform the duties it requires.

It's simple, really. And the politicians and lawyers and talking heads that say different are playing their supporters for fools. It may be red meat to the gullible and otherwise easily-led, but it isn't a winning strategy in the courts. And they all know it.