I'll preface this by saying that I am no longer a Christian. Like most people I know, I was born into a Christian household and those beliefs were passed down to me. My mother was a twice-yearly visitor to church while my grandparents made more of an effort to get us Sunday Mass more often. We all believed in "the Father, the Son, and the Holy Spirit" because it was all we ever knew.
As an adult, I made several attempts to settle into my faith, but it never really felt right. I always struggled with the inconsistencies, vague explanations, and self-serving interpretations. I couldn't reconcile the reality of what was happening in front of me with the never-ending rationalizations.
"Joe and Jane died in a car crash, but thankfully Jesus protected their little baby in the back seat." So why didn't Jesus just pump the brakes and save them all?
"We need to pray for Bobby to survive his battle with cancer."
You mean the cancer that God let him get?
"You need to tithe to the church."
I should give money to another mega-church instead to the homeless and hungry?
The final straw, though, was the disconnect between self-proclaimed Christians and their anything-but-Christ-like behavior towards those with different social, political, or personal values, beliefs, and opinions. It just seemed odd to have people claim an allegiance to the Prince of Peace and then act so hateful to anyone who believed differently. (Disclaimer: I am focusing on Christianity because that is how I was raised. In the bigger picture, though, my disbelief applies across all religions.)
So here I am today, nearly 50 years old and comfortable acknowledging that my life begins and ends in this world and that the only afterlife available to me is the legacy of kindness and service to others that they will, perhaps, continue to pass on after I am gone. And that's enough for me. I don't really spend my time arguing the existence (or lack thereof) with my friends who are believers. Doesn't seem like there is much point to that sort of behavior. 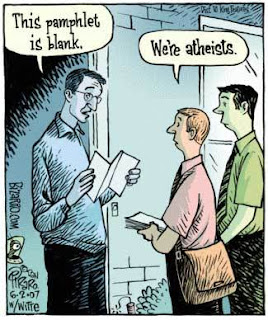 So why am I writing this on Easter Sunday, arguably the most important observed date in Christianity?
Because even though I don't personally believe, Christianity continues to be a source of frustration and anger for me. And I'm hoping that by taking the time to sit with my thoughts and work through them, I'll be able to identify and express exactly what is bothering me in all of this.
This is just my opinion, of course, but I think that Christians can be sorted into different categories based on their actions.
In Word Only
These are the folks who identify as Christian but really have no strong connection to their faith or any church. There's is much more a passive belief most likely ingrained from childhood. Ask them and they'll say they believe in God, but there faith means little more than that.
In Word, In Deed
These folks are absolutely more committed to their faith. They believe in God and they try to live their lives in a way that honors that belief. They are not perfect, but they are genuinely kind and loving people who work to make this world a better place as a way to honor and represent their God.

These folks are powerful and important and amazing. And to be honest, they were the ones that kept me coming back to religion, because their behavior and personal examples were compelling and inspiring. They were exactly what I always wanted religion to be but had long ago stopped hoping for.
There are too many to mention them all, and I consider myself fortunate to have that sort of "problem" in my life. But I'll publicly celebrate Lisa, Nancy, Colleen, Jenny and Jeff, Alicia and Brian, Sue and Tim, and Dani for showing all of us what it means to live your faith. You have my thanks and my respect.
Anything But
But then we have these people, the ones who claim to be Christian but act very differently. These are the people so willing to speak for God because they have all the answers. They scream and yell and threaten. They allow for no dissent. It's not enough for them to be free to worship as they please. They demand that their religious views be honored and accommodated no matter how it infringes upon others. They want prayer in school as long as it is the prayer that they believe. They want religion in control of the public square and the public purse.
These are the people who openly mock and insult those who believe differently. They jeer at City Council meetings when someone else offers a different prayer. They screech "Merry Christmas" as a challenge instead of a greeting. They expect non-believes to stand quietly and respectfully during Christian prayers at school events but protest Yoga in physical education classes because it promotes eastern religions. They expect to operate in the public market but want to be allowed to discriminate against anyone who doesn't share their view of Christianity.

In short, these people are assholes. They act as if this entire nation was created just for them and they expect the rest of us to fall in line with their beliefs. And they wouldn't know a Christian act if Jesus himself showed up and performed it in front of them.
Yes, I know that these people are a minority. They are but one type of Christian, and it's not fair to sort them into the same basket as the other two types I mentioned.
But it happens. I do it. I judge them all by the actions of the worst of them. I know it's wrong and I am working on it, but I do it.
For that, to my Christian friends who live their faith... I am sorry. I know that you do not deserve the scorn or ridicule that comes so easily to me these days. Your kindness does not deserve to be met with insults or judgment.
I will try to do right by you. And when I don't, I ask that you remind me of these words above. I'm not perfect, either. But I can certainly be better. I suppose we all can. 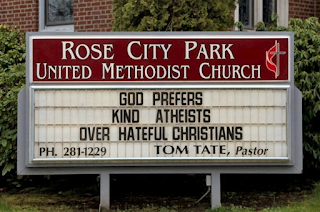 And to the others, the self-proclaimed Christians who seek to create a theocracy in this country, know this. I will continue to fight you and your bullshit every time, every place, at every opportunity. Because this country deserves better than you.