It's been three days now since the end of my Rock 'n' Roll Marathon weekend, and I'm still walking around on sore legs and blistered feet. There's much to tell, so here goes...

Friday afternoon, I headed down to the Expo to pick up my race packages. It felt a bit odd, honestly, being at such a big event by myself. It was yet another reminder that I need to make more of an effort to find local running buddies. But that's a post for another day. This is all about this past weekend. 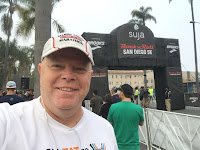 After finally getting to sleep after midnight, I woke at 4am and headed out for my 5K. I found parking right at the start line and settled in for a quick nap before the race. Soon enough, I was at the start line ready to go. Weather conditions were overcast and cool and perfect for the run. 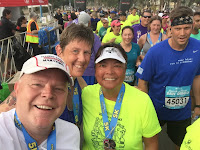 The run was nice, a little time in my own head as I enjoyed the scenery. But it got way better towards the end when I ran into a new friend that I had just met earlier at a screening of our documentary, From Fat To Finish. I ran into the finish line with her and her friend, and then we took the mandatory finish line photo sporting our new bling. 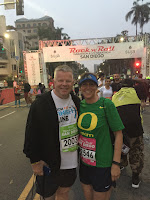 And then, it was Sunday morning. I parked in the same place as the day before, took the same nap, and was ready to go again. I got a text from a high school friend who was running the relay with her husband, so I hurried to the start line to get a picture together. It was great to see her (Hi, Brenda!) and I'm proud of her for running the relay. 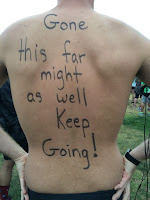 While I was waiting for the start, I found myself standing behind this guy in the bathroom line. I have no idea what his story was or where his journey started, but these words written on his back were an inspiration for me and, I'm sure, so many others on the course later.

(If you have never run in a large event, make it happen. There are so many amazing people with inspiring stories and smart, clever, funny, powerful messages. It's incredible.)

I started in Corral 14, so it took me about 30 minutes to actually get started on the course. I wasn't sure how I was going to hold up over the 26.2 miles, so in the back of my mind I was already considering making a course-change to the half marathon. But that wasn't until mile 8.1, anyway, so I had time to decide. 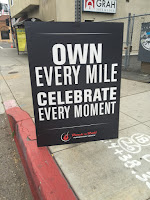 The first few miles were fun. I saw this sign on the course by mile 1 and I tried to remember this as I ran. This marathon wasn't going to be a PR and it was going to be tough, so I knew I needed to find something all along the way to motivate me. Celebrating every moment kept my mind busy and my heart happy. 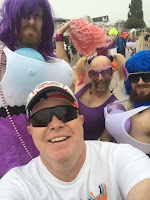 For me, running a full marathon in San Diego was a bit like an episode of "This Is Your Life." It started in Balboa Park, where so many of my training runs have been done. I ran by the old 6th and Penn Theater, were a play I wrote with a director friend was produced. I ran all through Hillcrest, past many local watering holes where I have enjoyed countless laughs and good times. 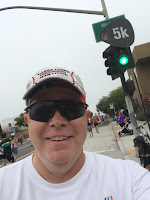 For those who don't know, Hillcrest is the "gayborhood" of San Diego. The folks here are truly amazing. And on race day, they did not disappoint. I even stopped to make sure I got a picture with my tribe.

Later, crossing the 5K mark, I started the run into my own neighborhood. I know every mile of these roads, since they are the same roads I run on all the time. I didn't even need to look at my GPS watch, as I knew the distances from corner to corner and street to street. It felt a bit odd running here with 30,000 running buddies out on the road with me. Fortunately, the North Park and Normal Heights communities were out in force, cheering and encouraging all of the runners along. My neighbors made sure that everyone felt welcome, and that made me even more proud to be one of them. 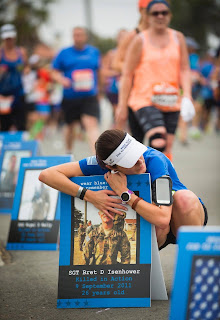 Past mile 5, though, I came across something that I wasn't expecting. It's known as the Blue Mile, and it's a section of the course dedicated to the memories of our fallen military men and women. Placed alongside the road are individual signs that each feature a photo along with the name, age, and date that the hero was lost to us. I first saw this memorial when I ran the Marine Corps Marathon in 2013, but I had no idea it was going to be part of the Rock 'n' Roll Marathon.

I made it a point to walk through this part of the course, choosing to slow down and see each and every one of these servicemen and women. I wanted to read their names, look at their faces, and truly see them. They deserved at least that. Afterwards, past the signs, there was a long line of American Flags, all held high and waved proudly by the Wear Blue: Run To Remember organization members. 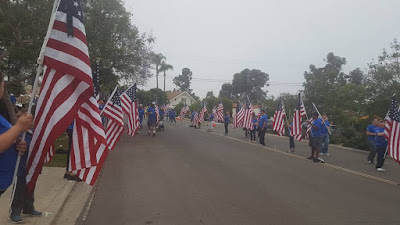 By this point, tears were steady streaming down my face. I made no attempt to hide them, and I was hardly the only person on the course reacting the same way. It was a solemn moment for all of us, and I believe we all felt grateful to be part of such a beautiful tribute. It was truly an honor. Little did I know that the Blue Mile wasn't quite done with me, yet. 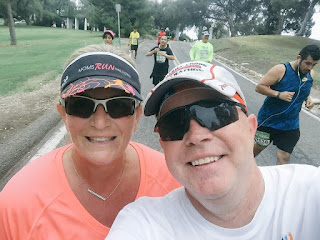 After passing the relay exchange area, I made my way towards mile 7.71. It was my favorite spot on the whole course... my own home. My husband was there cheering on the other runners in front of our house, and seeing him really lifted my spirits. I dashed in to use the bathroom, change running shoes, and meet up with my friend, Tammy, who had agreed to pace me for several miles along the course.

Tammy wasn't running the event, and she made it a point to NOT take any of the water or other runner support along the course. She was there to keep me company and I was so glad to have her with me. She was such a highlight of the day. The next six miles went by so much faster with the company, and before I knew it we were crossing the halfway point up in Presidio Park.

On the way down the hill from the park, we struck up a conversation with another runner. Her name was Sheri, and we found out that she was running the marathon in honor her son, the late Corporal Adrien Vaughn Lenk, USMC. She had never run any event... ever... but she felt called to this marathon and just decided that she was going to do it.

The three of us continued to chat as we made our way through the next couple of miles, and then Tammy was done and left Sheri and I to finish the marathon. We paused for one last moment to capture a photo of all of us together.

(Thanks again, Tammy, for being my running buddy for those important miles. Being out there alone would have really, really sucked. You made it that much easier for me to actually finish this thing.)

As Sheri and I ran on, we had a lot of time to talk. I had noticed that her son's name was on the back of her shirt, and I let her know that I recognized that name from one of the signs on the Blue Mile. She knew I was telling the truth when I described the picture of him on the sign.


The conversations we had were private, but she has given me permission to share that her son was not killed in combat. He took his own life in January 2015. His war wounds weren't physical, they were emotional, and he was every bit a casualty of war as if he had died in combat. Sheri is currently working on developing a non-profit dedicated to helping save other military servicemen and women from the pain that took her son away from her.

The next miles were difficult, but running with Sheri was a constant reminder that others have endured far more than sore legs and blistered feet. She and I laughed (a lot), bitched (a little), and helped each other keep putting one foot in front of the other. By mile 22, the blisters had completely taken over my feet and each step was so painful. But I was too far in to stop, and we just kept going.

The long, slow trek up Highway 163 towards Hillcrest was the worst of the course, and we were both so happy to top that hill and finally get to the downhill stretch. We walked - ambled, more accurately - but we kept moving. 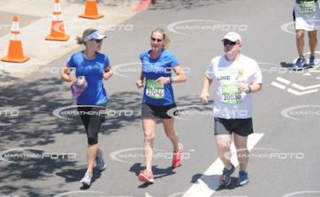 Soon enough, we were into downtown. As we turned north onto 5th Street for the very last two blocks of uphill, we were met by several members of Sheri's Wear Blue: Run To Remember family. After a brief chat as we walked, one of the ladies told me that they wanted to send me a Wear Blue shirt of my own, with Adrien's name on the back, in appreciation for my doing so much to help Sheri through her marathon. I'm not ashamed to admit that I was fighting back tears as I gratefully accepted that offer. 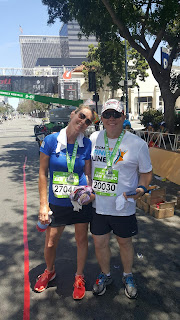 Funny thing, though. Sheri later referred to me as her Marathon Mentor. She really has no idea how much she helped me. Had I been alone, I would have likely quit any of the several times I felt beat down. But with her by my side, I knew that there was no way I would quit. If she could do 26.2 miles for her son, I could certainly stand by her and be her Marine in his absence. 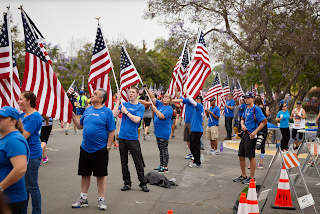 At the finish line, I got a chance to meet her other son, Julian. I didn't know it at the time, but I had already run right by him earlier on the course. He was a flag bearer back on the course at the Blue Mile. 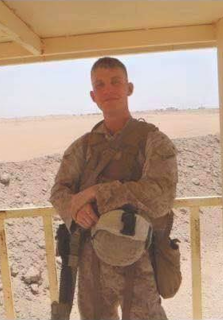 Adrien wasn't there with us physically as we ran those miles, but he was there in spirit. And I know that he would have been so proud of his mother and her determination to finish this marathon. She said that he was her inspiration, but really, she and the other Wear Blue family and friends were all inspirations to the rest of us. 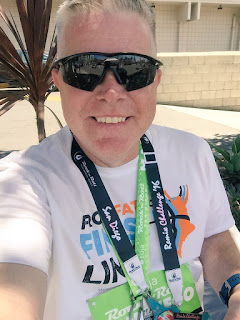 I finished my seventh marathon on Sunday, but I feel like I gained more than miles and medals. I was given the opportunity to honor a fellow Marine. I had the privilege of escorting her through thirteen miles of heat, sweat, and pain, all so she could stand up at the end and say, "This was for you, Adrien."

I've said it before and I'll say it again. Running continues to bring so much to my life. And just when I'm down and thinking that I've had enough, it allows me to cross paths with an amazing woman on a powerfully important mission.