Imagine if you and your neighbors were victims of home break-ins. You spoke to the police chief asking for more officers in your area, but his response to that was, "not all homes are being robbed."

Or if you called 9-1-1 to report that your home was going up in flames, and the dispatcher replied, "not all homes on your street are on fire."

The same holds true when people share their personal stories. Unfortunately, when they do, they often hear the same deflection and denial.

"It's scary to read news reports of white police officers in major cities referring to the people they are supposed to serve and protect as "niggers" and "animals.""
"Not all white people are racist."
"As a woman, I can't get through a single day without some strange man either talking down to me like I'm stupid or hitting on me with inappropriate comments."
"Not all men behave that way."
"I am disgusted by Christian leaders who call for homosexuals to be put to death, and I am surprised that political leaders would support them."
"Not all Christians are anti-gay."
"I worry that showing affection to my husband in public might enrage homophobes to the point where they threaten or attack us."
"Not all straight people are like that."

It's frustrating that legitimate concerns arising from personal experiences are so easily and completely downplayed or ignored. It shouldn't matter that all officers aren't racist. That isn't relevant or even on-topic. No one made that claim. The only thing that matters in this specific discussion, for example, are the officers that are racist, the impact they have, and what can and should be done to get rid of them.

I get it. People are defensive when they think someone might be including them in the "bad guys" group. But unless that entire group is perfect, there is going to be some percentage of them that are a problem and need to addressed.

Here's a different way to look at it. Imagine you are a parent and your young child came home and told you that there were bullies at the playground. You wouldn't say, "son, most people aren't bullies," and act like that had solved the problem. You would want to learn more about who they were, what they had said, and how they had behaved. Only by asking questions and listening to your son would you know what what his experience was and how you could best help him deal with it.

The same holds true for your friends, families, co-workers, and even strangers. If they are strong enough and courageous enough to speak up about a group of people that are bullying, harassing, or discriminating against them, the best thing you can do is respect them enough to listen. Ask questions. Seek to understand.

Look, I get it. I'm on both sides of this type of interaction. I'm a white man, which means that I don't fully understand what it is like day-by-day for a woman or a minority. I don't know what it means to worry I might be raped when I walk out into an empty parking garage floor late at night. I don't know what it means to be followed around a store by a salesclerk who decided that my skin color automatically makes me a shoplifter. I can't relate to these situations because they generally don't happen to white men.

Conversely, as a gay man, I do know what it means to be singled out and attacked. I worry about public displays of affection with my husband. I'm angry that my civil rights are constantly at risk. I am bothered when I hear  the casual use of "fag" and "homo" in public.

Sometimes I am part of the majority. Other times, I am in the minority. I expect most of us can say the same thing at different times and in different situations. The challenge for us is to remember how we feel as a minority when we are a majority, and to act accordingly.

And finally, the question everyone is surely asking... why does this even matter?

It matters because we can only help someone else when we understand what is happening to them and how it affects them. Sympathy is good but empathy is better. Sympathy says, "oh, I'm sorry that happened." Empathy says, "I know that hurts you and I don't want it to happen again."

One more thing: Every single one of us can be on the wrong side of this interaction. Yes, even the rich, white, straight, Christian man can be in a situation where they are discriminated against. Really.


So now you know. If someone is sharing their personal experience with someone who has harmed or wronged them and you respond by arguing, "but, not all (fill in the blank) are like that," then this meme is for you. 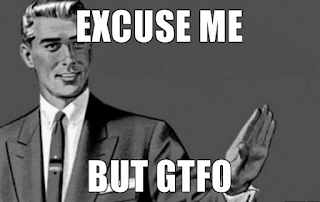