There. I said it. No half-measures, no hiding behind subtlety. No pretending there's a moral high road.

If you don't know who she was, then you don't know know the damage she did. And you won't understand why I'm glad that she is no longer able to damage this country with her bigotry. But any woman who was ever raped by her husband and expected to just accept that it is part of marriage should feel free to spit in her general direction. Any gay man or woman who grew up feeling like their very existence was someone an affront to creation is invited to celebrate the end of her miserable life.

Brutal, you think? You have no idea what brutality looks or feels like.

Because this isn't about just one person. It's not about political or social disagreements. And it's most certainly not about rising above the anger and offering forgiveness.

Schlafly is dead. And that's fine with me. But she's not the only grave I intend to dance upon. There are many others. And I offer no apologies. Because some people live their life in such a way that the only appropriate response after they die is to ring the bells and cheer. 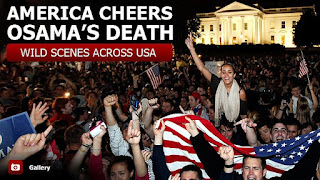 First, despite the self-righteous claims of some on the political Right, gravedancing is not the exclusive playground of the Left. Need I remind everyone of the hateful cheers in response to Jimmy Carter's announcement that he had brain cancer? Does "#ACancerHasCancer" ring a bell?

Second, celebrating the death of a terrible person is nothing new. And it's certainly not a defining action by any one side of the political aisle. When Osama Bin Ladin was killed by Navy Seals in 2011, Americans poured into the streets in a spontaneous display of happiness and satisfaction. We not only danced on his grave, we turned his death into a patriotic and joyful parade from coast to coast.

Clearly, it's okay to celebrate SOME deaths. It isn't a question of IF, it's a question of WHO. So what defines a person as so horrible that it's okay to be glad they have died? Where is that line between an appropriate response and a hateful celebration?

To understand my response to the death of someone like Schlafly, or Fred Phelps, or Jerry Falwell, you have to first understand the impact of their lives. Each of these people, and so many others, made their lives more about the people they hated than about anyone they claimed to love. Their public rhetoric was so hateful, so inflammatory, that they made the lives of so many people a living hell.

One example: Schlafly's oft-repeated claim that the rape of a wife by her husband was impossible, in that the wife had already consented to sex by marrying the man. For many years after, lawmakers hid behind that claim and used it to justify their own failure to legally protect victims of spousal rape.

Another example: Schlafly's equally popular claim that sexual harassment in the workplace was "rarely a problem for the virtuous woman." This victim-blaming philosophy was cold comfort to the millions of women who were repeatedly harassed on the job and had no legal recourse in a judicial system that saw them as the problem. 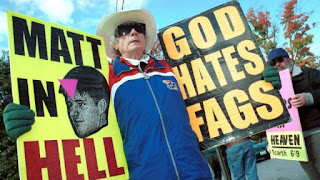 Fred Phelps' hate and bigotry were so extreme as to appear almost a parody. Gays and lesbians suffered his judgement for years, but it wasn't until he turned his attention and actions towards the fallen military servicemen and women that the country recoiled against him.

And what of Jerry Falwell, whose only action that made the world better was his death in 2007? His hateful anti-gay preaching inspired generations of America to judge their gay and lesbian family members, friends, and neighbors as evil, to cast them out and leave them to find their way alone and ashamed. He was a hate-monger and a religious zealot who didn't care about those he judged as sinners.

It's easy to look at these people and see them as outliers, as voices from the fringe. But their actions had real consequences for those they targeted. Specifically, gay and lesbian young men and women grew up ostracized from their "good Christian" families, and people like Falwell encouraged parents to separate themselves from "the evil that has taken root in your child."

How can anyone read these words from Falwell and NOT be happy his tongue is silenced?
"Homosexuals are brute beasts... part of a vile and satanic system that will be utterly annihilated, and there will be a celebration in heaven."

These horrible people had zero respect for the lives of those they judged as "less than," so why am I expected to return that hate with compassion and understanding?

I honestly don't think people understand what it is like to be on the receiving end of such hate and vitriol. It's not just a political disagreement, wherein two people have a difference of opinion on the potential financial impact of raising the minimum wage or the effectiveness of a food-services grant for a public school. Those issues matter, but they shouldn't denigrate to personal attacks.

Compare that to the rhetoric of the so-called "Christian Right" against the gay community. The quotes are endless and get worse and worse.


Honestly, is there anything more vile and disgusting than an adult who would sexually prey on children? Imagine it was you that was being accused of this. Would you want to engage in civil, respectful dialog with this person?

No. Simple answer, no. These people cannot be talked to like rational, mature, sensible adults. Because they aren't. They are idiots, hateful little fuckers who choose to attack others in an attempt to raise themselves up as moral leaders. And when they finally die, and are silenced forever, I will rejoice.

Their words and actions have direct consequences. The increased likelihood of suicide by young gay men and women is just one concrete example of the damage done by this hateful rhetoric.

I'm done playing along. I'm a good person. I'm a proud American. I'm a Veteran of the United States Marine Corps. I'm a husband of nearly twenty years. I'm a homeowner and a taxpayer and an active participant in the great democracy of this nation.

What I am not is a person willing to go along to get along. I am done pretending that everyone's opinion deserves respect. It doesn't. Some people are ignorant assholes and deserve to be recognized as such.