I'll be honest. There is a lot of funny to be found in this situation. Changing my brain chemistry is a very inexact science, and it's inevitable that humor finds its way in. 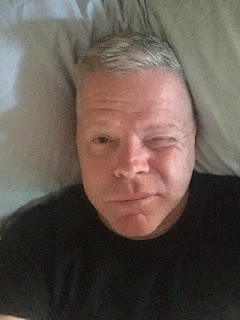 I have always struggled with sleep. On the plus side, I can lay down and drift off to sleep almost immediately. On the negative side, I don't stay asleep for very long. After a couple of hours, I am wide awake again. (In fact, it's 3am as I write this, because I couldn't sleep tonight. But more on that later.)

My sleeping problem has become worse with my anxiety and depression medication. My 4-5 hours of sleep per night dropped off to 3-4, at most. That's not good. So I contacted my doctor to let her know and see what she recommended I do. She prescribed a mild sleep aid to help me sleep through the night. I went to pick up my prescription, and when my name was called, I stepped up to the counter and was met by a young-ish pharmacist I'll call Dr. Mumbles. He briefly - and loudly - explained what the pills were, what they should do, and what I should expect. I nodded along, said thank you, and was ready to walk away. Then, quickly and rather quietly, the doctor earned his nickname by mumbling something about additional side effects and a recommendation to "... head directly to the ER to avoid long-term damage."

I stepped back up to the counter, called him back, and said, "excuse me, what was that last part?"

Turns out, one of the rare but possible side effects of this sleeping pill is priapism. I'd never heard of that, so I had to ask him again to explain. Turns out, as I learned in greater Wikipedia detail later, "priapism is a medical condition in which the erect penis does not return to its flaccid state, despite the absence of both physical and psychological stimulation, within four hours. Priapism is potentially painful and is considered a medical emergency, which should receive proper treatment by a qualified medical practitioner."

So, you know, there's that to look forward to. Now not only will I be wide awake, I'll be wandering down to the Emergency Room to let the whole hospital know that my insomnia has turned me into a 16-year-old boy. What else could I do but sit in my car, giggle a little bit, and decide the whole situation was comedy gold? Good times.

Alas, the humor was short-lived. My medication and natural insomnia are conspiring to give me a very bad time, indeed. And it's getting worse each day. I'll be calling my doctor later this morning to discuss the problem and find an alternative solution. Because I can't keep this up.

Yesterday was the worst. I was antsy and fidgety, unable to stay focused on anything. I grabbed the TV remote a half-dozen times but never turned it on, because there isn't anything that I felt would hold my attention. I tried to read and tried to write, but neither activity was enough to calm my racing mind. Ultimately, I just gave up and laid down for a nap. I didn't sleep well, but at least I was able to ease the stress levels a bit.

It wasn't just yesterday, though. In Phoenix all weekend, I really struggled to settle and calm myself. I was tired, exhausted even, but also really wired and unable to sleep. Standing around talking to people, I found myself thinking, "damn, I really just want to crawl into that corner over there and take a quick nap." That's no way to go through life, right? I can't just drop into nap-mode every couple of hours. It started out amusing, but it isn't funny now. Sleeplessness is a significant contributor to a negative mindset, and I really can't afford to slide back into that place.

I'll be honest. I'm a little worried here. I know that this is all part of the process, but I hate to think that the first medication I am taking might not be the one that works for me long-term. A friend who went through a similar situation said it took him nearly a year, four different medications, and many different dosage changes before he found what works for him. Damn. I don't want that for me. I mean, I want the "this works" part but not the "took a year to get there" part.

But, it is what it is, right? I need to do whatever I have to if I want to get and stay healthy.

My course of action for the day is simple. I'm going to let my boss know I need to take the day off for medical reasons. I'm going to contact my doctor as soon as she is in the office. I'm going to be completely honest about all that is happening with me right now. And I'm going to make whatever changes she recommends to my prescriptions. I trust her.

Yes, this is a problem. But it's nothing that some open communication and a small co-pay won't fix, right?

If you're just catching up, here's what you missed earlier on "Life, Medicated":
"I am tired of being tired. I need help. It's time to talk to the doctor about medication." (Part 1)
"Okay, so I have meds and I'm taking them. Should I feel something, yet?" (Part 2)
"Oh, Crap. I already forgot to take my pill." (Part 3)
"We should probably talk to someone about this." (Part 4)