The Increasingly Selfish World of Me, Me, Me. ("Life, Medicated." Part 7)

I already know this is going to be a tough piece to write, because it's only worth writing if I'm completely honest. So let's do this.
Sometimes, I am a really crappy friend. I am oblivious to what's going on around me, and I act like the only things that matter are whatever is happening with me at the time.
There. I said it. And it's true.
What I don't know is how much of this is because of my anxiety and depression and how much is just because I can be an asshole.
That part really stinks. Because I honestly don't know.
No, John. You're such a good guy. Look at all the people you help with your fundraising and community activities.
Yes, that's true. But one doesn't negate the other. I can do the big things and still fail to do the small things. And those small things matter.
For example, a friend of mine recently took a long driving trip. She visited a few states, lots of people, and had quite the adventure. But it was while I was sorting through all of my no-sleep drama and I was mostly oblivious to her travels. Worse, when she returned, I didn't take the time to pull her aside, look her in the eye, and ask, "so, how was the vacation trip?"
Sure, we chatted a bit about it. But looking back, I feel like I really just glossed over it. I didn't press her to share details, say what was great and fun, and tell me all about it. And that's not cool. As a friend, I should want to hear all of that. And I do. I just don't think to ask sometimes, at least not in the moment. Instead, at 3am, I wake up thinking, "well, that was rude." 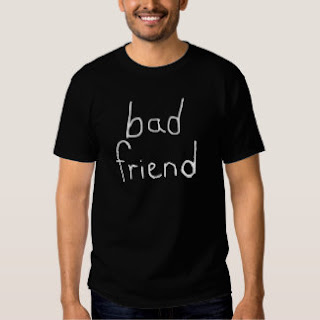 There are plenty of other examples. I was just asked by a friend if we wanted to join them for a movie. I thought it would be fun, but I needed to check with my husband to see if he felt up to it. But by the time I got back into the house and spent some time talking with him and our house guest, I completely forgot that I was supposed to text the friend back and confirm yes/no for the movie. She had to message me again asking about it.

Rude.
Am I just a bad friend? Is my depression and anxiety impacting my memory and awareness? Are the meds affecting me?

Here's the really suck part. I have no idea.
And I don't know exactly what to do about it to make things better.
I need people. And when I want to be around them, I really, really want to be around them. Other times, it's like a switch is flipped and I just really want to be alone. In those moments, I don't care about other people or what is going on with them.
Again... rude.
I suppose, like everything else I am dealing with right now, I will just handle this one person, one moment, one interaction at a time. I'll be honest with friends and make sure they know what is happening with me and why I may not be at my best right now.
Mostly, though, I need to make more of an effort to acknowledge other people and remember that they have an entire life of their own. They are also worried about things, happy about others, and interested in talking about themselves to someone who is actually listening.
I can handle this. It's just one more thing I need to do, right?
*sigh*