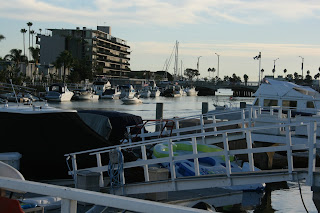 After nearly three months of preparation and training, the Long Beach Marathon - my Marathon Number Eight - is now just a memory. My training was not great but it was definitely better than my training for the San Diego Rock 'n Roll Marathon, so I consider the whole experience an improvement.
Hello, Dexter
The event was in Long Beach, which is at least a ninety-minute drive from my home in San Diego. With such an early start time, I decided it made sense to stay overnight before the race. Hotels in that area are costly and often unavailable the night before a major event, so I opted for AirBnb, instead. Good call. For $80, I found a private room in a beautiful home only a few miles from the start/finish line and two blocks away from the 12-mile mark on the course. That meant a good night sleep before the race instead of having to drive all the way up from San Diego. 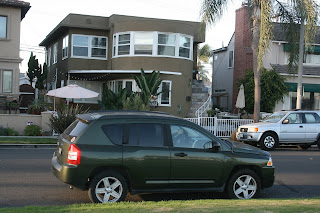 The house was also featured throughout Season 8 of Dexter, which is kind of cool. The host was super friendly, too, which reinforces the idea of AirBnb instead of hotels whenever possible.
Pack Carefully
The night before a race is always a little stressful. I have more gear than I can possibly carry or use, but I do like to have options. I opted to carry a few things with me at the start and pick up extras (like my water bottle and sunscreen) from my husband when I saw him at Mile 11/12.
The Start Line
It's always emotional for me at the start line. I was alone with my own thoughts this time, so it was an opportunity to really think about all the choices I had made that led me to that moment. From a guy sitting on the couch to a man about to run a marathon, it has been quite a journey.
After crying my way through the National Anthem, we were off.
What A View
The Long Beach course was overall not the prettiest, but parts of it were spectacular. I really enjoyed the sunrise shining down on the water and the Queen Mary. It was so gorgeous, I stopped for several pictures and didn't care one bit about how much time it was taking me. Always notice the scenery, folks.
On Pace
After running a seven-hour marathon in San Diego, I set a goal for myself of 6:30 for Long Beach. I knew that sub-15:00 miles were easy enough to maintain and that would bring me in right around my goal time. My second 5K was actually faster than my first and I still felt strong after hitting ten miles. But me being me, that was all about to change.
Don't Talk To Strangers 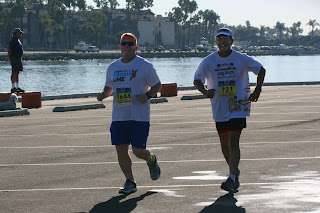 Maybe I need to add Rick Springfield's song to my running playlist, because talking to strangers seems to be impacting my finish times. (I tease, I tease. I will always talk to people on the course. That's half the fun of entering a race.)
I met a man named Rich while we were still finishing our run along the water's edge. He was a friendly guy, running by himself, and we struck up an easy conversation as we ran/walked. Turns out he is normally a sub-four hour marathoner, but he was not prepared with his training for Long Beach and he was paying the price. I opted to slow down a bit to stay with him, since he seemed to be struggling and hadn't yet fully committed to sticking with it and finishing. What can I say? I'm a sucker for helping other people. 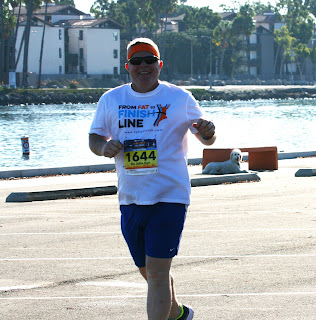 Meeting Ric
This race was unusual in that my husband had come along. I expected he would be meeting me near Mile 11/12, and that's right where he was. Seeing him gave me such a boost of energy and momentum just when I needed it the most. I introduced him to Rich and explained that we were going to run the rest together, and he wished us well and sent us back out on our way.
The Long Miles
If you have never run a marathon, let me tell you about the "back miles." They are the ones that you have to run after the half-marathoners have peeled off for their own course. They are miles 14-19, where you have been running for a long time but still have so, so much to still run.
I felt pretty good on these miles, but candidly, Rich was really having a tough time. His body did not want to be out there, and he was physically sick a few times. But he dug deep and refused to quit, so I just kept pulling him along. And by the time we cleared the Cal State University Long Beach campus and hit Mile 20, he was finally convinced that he was going to finish. 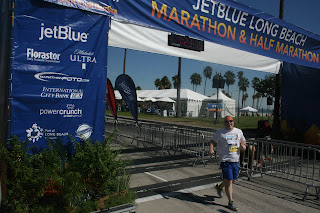 No Regrets
I crossed the finish line with an official time of 7:20:XX. It was much slower than I thought I would be, but I am absolutely proud of the race I ran. I could have left Rich and stuck with my original race plan, but that wasn't the point of being out there. I was supposed to catch up to Rich and make sure he finished, and that's what I did. There will be other marathons for me to improve on my last time. 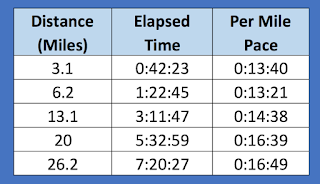 Fun Fact: When we took off at the start line, a Jet Blue Airlines (the marathon sponsor) jet was taking off from Long Beach to La Guardia. The challenge to each runner was, "beat the jet." The scheduled time was 6:20:00, so most people felt confident they would finish before the plane landed. But the unexpected twist was the phrase, "if you can't beat the jet, join it." Several of us that finished AFTER the jet landed were rewarded with a free, round-trip ticket anywhere Jet Blue flies non-stop from Long Beach. Yep, I won a ticket to New York just because I chose to stick with a slower runner.
Who's awesome now? This guy.