Previously on "Life, Medicated":
"I am tired of being tired. I need help. It's time to talk to the doctor about medication."
"Okay, so I have meds and I'm taking them. Should I feel something, yet?"
Yeah, actually, that's about all you've missed so far. But here's where it starts to get good... or messy. Not sure which way this is going to go, yet.
That Was Fast 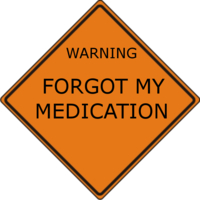 It didn't take long for me to screw up. Yesterday was only Day 10 and I already forgot to take my pill. Because it's new, I really don't know what the impact might be of missing or delaying a dose. My doctor said it was important to establish a routine with the medication, but she didn't say it was critical. Still, no matter, my takeaway was that I had already found a way to screw things up.
I was nearly at work twenty-five miles away when I realized I missed it, and there was no way I was going to fight morning traffic in both directions just to get back home for it. I tried a couple of different ways to get the pill (have a friend who was already driving up swing by the house first, get the doctor to call in a single-dose prescription at the pharmacy across from my office, etc), but in the end, I opted to just wait until I got home late afternoon to take the pill. And I appear to have survived with my faculties intact. 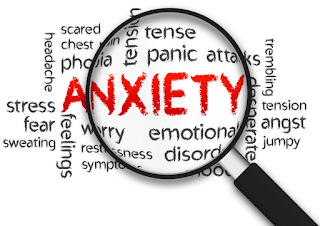 I was driving to work and decided it would be a good time to call and talk with my Mother. I know that she's been worried about me and I wanted to give her an update. As I was playing the conversation ahead in my mind, and thinking about saying, "I'm now taking the meds," I realized that I had forgotten my pill. So instead of calling and talking with her, I started churning on the impact of my mistake.

Right away, I slipped into "you're an idiot" mode. I couldn't just go with, "it's still new and you're going to forget sometimes, so let's find a way to remind you until it becomes a habit." Nope. I went the self-criticism route. And why not? Once I start down that path, I want to go as far as possible. I bottomed-out at, "fuck, I hate this so much." That's when I could feel myself close to tears and realized I was truly losing it.

I switched to problem-solver mode and starting making the calls for help. Ultimately, they didn't work, but taking an action helped me shift from attacking myself to attacking the problem. And that's a lesson I need to revisit soon.

Failure or Fear
From the vantage point of hindsight, I have a better idea of what was happening. I was beating myself up over my failure, and that was definitely a part of it. But more than that, I was afraid of the potential consequences of missing my medication. It wasn't really a rational response, but all of this is new to me. My only experience with anything even close to it is giving my dog, Ruthie, pills twice a day to prevent seizures. Our Vet has made it crystal-clear to us that we are NOT to miss a dose. She said, "she is stable now and has been seizure-free for more than a year, but missing her pills even once could result in a massive, life-threatening seizure." Is that true? Well, I trust my Vet. And if it isn't true, maybe she just says it so we respect the importance of the medications.

Either way, I was playing that in the back of my mind. I forgot my pill and I had no idea what that might mean. Was it no big deal? Or was I going to have a debilitating headache or feel out of control?

Yeah, I know. Drama queen, much? In the end, a phone call to my doctor let me know that I was okay taking the pill as soon as I got home. And that put an end to the fear.

The Big Moment
My big takeaway from this experience may seem obvious to everyone else, but it somehow slipped by me.

I might have to deal with this for the rest of my life.

Sure, maybe medication is a temporary thing to help me get back on track. But since I'm dealt with depression and anxiety my entire life, I'm thinking that is unlikely. I'll probably have to take medication in some dose for the rest of my life. And that means having to remember each day to take them. So now my desire to be mentally healthy is going to insert itself into every morning of mine.

And that has to be okay. If living a long and happy life means doing it with meds, fine. I'm still in. Because I need this.

So the story continues...