There is a craziness about doing the same things over and over despite knowing they don’t work. I mean, repeat the same behavior and you get the same results. It’s that simple. And when the behavior is bad or ineffective, the results will be poor.
What hasn’t worked
Quick fixes. There is no way instant solution that fixes everything. Expecting that to happen leads to disappointment and I ultimately fail.
Extreme shifts. All or nothing behavior isn’t sustainable in the long run. I change drastically, then cave back to my previous behaviors and ultimately fail.
Scale-based challenges. As much as I want to see my body weight numbers fall, I know that physical health is more than digits on a scale. Sooner or later, the scale stalls, sending me into a tailspin and I ultimately fail.
Myopic changes. Being focused on just one piece of my overall health means that other areas are neglected. I become unbalanced and ultimately fail.
Small goals and short-term plans aren’t cutting it. They all lead to failure.
What has worked
Back in 2012, I signed up to run the Pasadena Marathon. But at the beginning of the year, I knew I was in no shape to run it. I had put on weight since running the Marine Corps Marathon in October 2011. I was (not) dealing with depression. And I felt completely adrift from training and preparation. I was just stumbling from day to day, honestly.
But I found a way. I created Project One Five, a hyper-focused training program to prepare me for Pasadena. I made a one-hundred-day commitment. Each day, I would find five different ways to help me get ready for my upcoming marathon. Items would include physical training, emotional recovery, spiritual study, and mental planning. Anything counted, provided it moved me from where I was to where I wanted to be.
It was a total success. Without working on a specific weight loss goal, I still managed to drop to 182 pounds. I raised more than $2500 for Semper Fi Fund Injured Marine Fund. And I ran a 4:40 marathon, beating my previous PR by nineteen minutes. By all measures, Project One Five helped me get completely back on track and reach all of my goals. 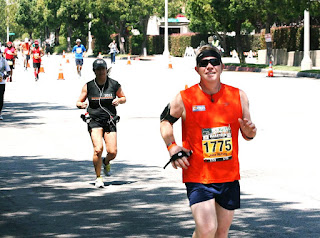 All that said, it’s clear to me that I need to kick off another Project One Five if I am to be successful again.
It sounds intimidating, I know. Five hundred actions between now and June 16, 2017. But when I break it down to one action at a time, five actions per day, it becomes possible. And when I look back on my previous experience, I know it is more than possible. It’s absolutely doable.
Wednesday morning, March 8, 2017, is day one. Feel free to follow my progress on my blog (Runner12) or on Twitter (@JohnHulsey).

I can do this. Again.