I've just finished running the Ragnar Relay Series Del Sol event in Phoenix, and I am still on a high from my adventure. I spent thirty-six hours with my team, Kilty Pleasures, and we had such a great time that I have difficulty even finding the words to describe it.

Looking back on the relay, I realized that when I've described it to other people, I've focused on the running exclusively. "Oh, you run thirty-six legs, three per person." But that really only scratches the surface. There's so much more to running a relay race than just the running. So, I thought I would take this opportunity to explain the different roles people play during the event.

Runners
Of course, there are runners. Twelve of them, usually. And each runner does run three legs each. So runner 1 goes out and runs anywhere from two to ten miles, on average. Then runner 2 does the same. Then runner 3. And on it goes until runner 12 finishes. At that point, runner 1 starts again and the cycle repeats twice. Some runs are easy while others are difficult. Some are flat and some are all uphill or downhill. Some runs are during the heat of the day and others are in the cool of the night. But rain or snow, sun or shade, all the runs must be done.

Drivers
While the runner is on the course, the rest of the team is either off the course inactive (six members) or in the van leapfrogging. As the runner goes out, the van will pass him, wait to check on him and make sure he is okay, then drive ahead, then wait on him, etc. This happens until the runner is close enough to the exchange, at which time the van drives ahead and the next runners gets ready to go out. Being a driver at a relay can be incredibly stressful. You have to watch for regular traffic, other vans, and all the runners out on the course. You have to stay awake when others are napping, stay alert behind the wheel, and stay focused on everything around you. It's a lot of pressure but it has to be done.

Navigators/Safety Officers
The driver is assisted by the front-seat passenger. This person acts a navigator, making sure the driver knows where they are going. This can be extremely confusing, as there are potentially three different routes - the runner's route, the directed van route, and the most direct route offered by GPS. Sometimes it's easy when the runners all go down a long, long highway. Other times, it's made difficult by lots of turns and different roads. This person is also the designated Safety Officer, tasked with helping keep the driver, the other passengers, and the runners safe.

Timekeepers
Keeping time in a relay race is super important. The first part is paying attention to the time your runner has been on the course. You need to know when to expect them to run by during a check-in stop and when to expect them to come into the exchange at the end of their run. You don't want to screw it up and miss your runner. The other important element of timekeeping is when you are switching from one van to the other. The inactive van needs to keep up with the active van so they know when to get to the exchange and take over. Screw up the timekeeping and you end up with a runner coming in and no one there to replace him.

Social Media Team
Be honest, half the fun of running a relay race is the chance to show off your adventures on social media. But that takes time and energy, so it's good to designate a person to keep up with Facebook/Instagram/Twitter, etc.

On Deck and Recovery Runners
While one runner is on the course, there are two other runners to deal with. One is the person who has just finished. She needs time to recover after her run, so she will usually settle in the van and spend time cooling down, getting out of her running gear, and often grabbing a quick snack and a drink. The other runner is the On Deck runner, who needs to spend time getting ready to run. That means they are fidgeting with their earphones and music, GPS watch, running shoes, etc. They are focused on themselves and need that time to get prepped to run.

Cheerleaders/Supporters
This may be the most important role of all. While your runner is on the course, you want to make sure that you stop alongside the road, wait for them to pass, and then cheer and encourage them. You might also meet them with water or snacks, depending on how long they have been on the course and what they need. You also want to be at each exchange to cheer your runners in and out.
____________

If you're counting, you'll see that makes eight distinct roles, but each van only has six people. And that means that people often have to cover more than one job at the same time. Teammates will shift around and take responsibility for different tasks based on the needs of the van at any given time. And each job is important.

So, if you want to run a relay race, be prepared to do more than run. This is truly a team event, and there is something for everyone to do at any given time.

Okay, now who wants to run a relay race with me? 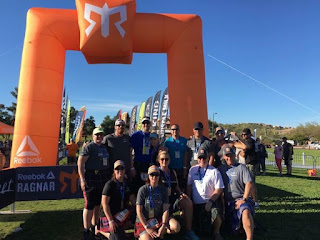